Once upon a time, I used to live in Lotusland, apparently so named by local newspaper columnist Allan Fotheringham. One of Canada’s largest and better known cities has much to offer the independent traveller. Check out some Vancouver Vittles.

HOW TO GET HERE?

You can come by plane, train, automobile or bus depending on where your trip originates. If coming by plane, there are a few options to get into town; public transportation (bus or Skytrain), rental car or taxi. The ride from the airport to downtown is about 30 minutes.

From Canada: Flying is the quickest option from within Canada. Westjet Airlines is a popular local carrier. Another option for those with a little extra cash and time can try the Rocky Mountaineer train. This scenic rail ride takes you through the Rocky Mountains. The trip originates in various locations (Banff, Calgary, Jasper) and takes 2-8 days depending on which package you buy.

From the US: Flying is the quickest way to get here unless you are coming from Seattle. From there it is approximately a 2-hour drive. The good ol’ Greyhound bus has regular service from Seattle to Vancouver. Leave extra time to clear customs when crossing the border.

From Overseas: Flying is the best option unless you have oodles of money and time to sail your way here. Most major airlines fly into Vancouver International Airport. If coming from Europe, you will likely connect through Toronto or Montreal before continuing on to Vancouver. Flights from Asia and the Pacific Rim will likely be more direct.

There are hotels for every budget. Prices range from $20-$300/night (Canadian dollars). For cheap and cheerful, try the HI (Hostelling International) youth hostels all of which are fairly centrally located. The Jericho Beach location is only open during the summer months while both of the other downtown locations are open year round. Self-catering apartments and bed and breakfasts are a good option for an affordable home away from home. If you prefer to be catered to, the usual hotel chains reside here as well i.e. Holiday Inn, Best Western, and Hilton. If you belong to the Motor Association you can usually apply your discounts to Canadian locations. For luxury there’s always the Fairmont Hotel in downtown Vancouver.

Active – Walk the Stanley Park seawall, swim the beaches, ski/hike Grouse Mountain in North Vancouver. This can often all be done in one day!

Self-indulgent – Eat, shop and be merry! Walk West 4th Avenue. Saunter down the street for some decadent and creative chocolates at Chocolate Arts. I learned how to make truffles from the owner and he certainly lives up to his slogan “fine chocolate is an art”. Keep heading east on West 4th Avenue and you will eventually reach Granville Island. This ‘island’ will keep you occupied for hours with the shopping to do, food to eat, artists’ studios to visit, shows to see and houseboat community to ogle.

Vegetarians rejoice in the many options available to you! Try the Naam restaurant in Kitsilano for vegetarian cuisine 24/7, 364 days a year. Seafood lovers will also appreciate the bounty that is at Vancouver’s doorstep. Salmon is particularly popular.

Culture: Visit the Museum of Anthropology, a world-renowned museum housing an extensive collection of ethnographic materials from most continents as well as an awesome First Nations collection. They also have some of Bill Reid’s work. Bill Reid was an artist of Haida descent who designed the famous Jade Canoe sculpture displayed at the Canadian embassy in Washington, on the Canadian $20 bill, at the Vancouver airport and the museum of Civilization in Ottawa.
The Vancouver Art Gallery is a great rainy day activity. Capilano Suspension Bridge on the north shore is a nice all-encompassing day trip. Learn about the forest and First Nations culture here. People with a fear of heights be forewarned! The bridge is suspended 70 m (230 feet) above a river and some people delight in running along the bridge causing it to swing. 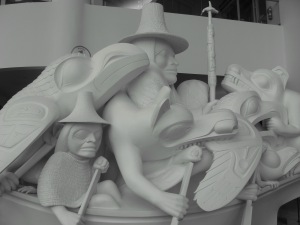 The Jade Canoe by Bill Reid
Photo by Kimberley (c)2015

Day trips: Check out the ski and snowboard mecca of Whistler (a two-hour drive north of Vancouver). The HI youth hostel here opened July 2010 after the Olympic Games. Or visit one of the Gulf Islands for a day trip or overnight stay. These islands are known for their artisan communities and natural beauty.

Vancouver is a walkers’ paradise. Bring a good pair of walking shoes and hit the streets. Most of the top sights are centrally located. If you must, use a vehicle to get around; public transportation is also very amenable. Cost depends on how many zones you travel in. A 3 zone single ticket will cost $5.50 during peak times and your ticket is good for 90 minutes in any direction from the time of purchase. A day pass is a better deal if you are doing a whirlwind tour of Vancouver’s highlights. It costs $9.75 and is good for all zones at any day/time of the week. Tickets can be used for the bus, Skytrain or the SeaBus, a passenger ferry connecting downtown Vancouver and the North Shore.

Driving is not advisable for a relaxing holiday. Vancouver’s laid-back reputation is lost when Vancouverites get behind the wheel of a car.

Officially Canada is a bilingual country (French and English). English is widely spoken though you will likely hear more Cantonese due to the high number of Chinese residents. Though not widely spoken on the West Coast, French is still required to be available to those who request it in government and tourist offices. You will also see French written on product labels and signs.

Vancouver has a reputation for being eco and gay friendly. It is the birthplace of Greenpeace, the environmentally active non-profit organization. The climate is milder than the rest of Canada and snow here is rare, by Canadian standards. However, there can be days on end of grey skies and rain.

February is a nice time to visit as it is off-season with crowd-free streets and deals to be had. The cherry blossoms are in bloom and their intoxicating fragrance helps to quell some of the foul city smells. However, Vancouver tends to rain a lot during the winter months. Bring a sturdy umbrella, good rain gear and water-resistant clothes.
The winter Olympics were held in Whistler in 2010.