August 19th was International Orangutan Day. My first introduction to these ginger apes was at the Toronto Zoo and I attended Orangutan Awareness weekend at the same zoo to mark this occasion. 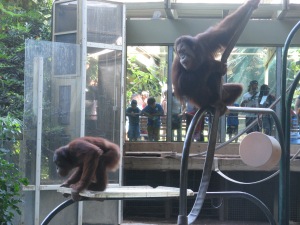 Orangutans spend a great deal of time in the trees and are found in Borneo and Sumatra. Deforestation is destroying their natural habitat, putting them in danger of dying out. In terms of numbers the orangutans in Borneo fare a little better than their Sumatran brethren.

In the wild there are approximately 7500 orangutans in Sumatra and 45, 000+ in Borneo.
(Retrieved August 23, 2015 from World Wildlife Fund: Species/Orangutan/Overview)

The main product at the centre of controversy is palm oil, an ingredient found in many processed foods, cosmetics and soap. It is a typical story line of big food/cosmetic corporations exploiting the poverty of the locals and aggressively farming their land to make a profit. There are efforts afoot to encourage a sustainable palm oil industry and spread awareness of the orangutan’s plight. 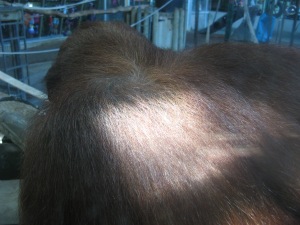 Besides orangutans, there is other wildlife that depends on the forests as well as food and medicinal plants found there from which we can all benefit.

Travel with purpose: learn about our planet, become informed about issues that affect us all and travel conscientiously.

Hopefully, the local farmers’ will appreciate the financial benefit of preserving the forests and all life in it as a means to earn income rather than prostituting themselves for palm oil. It seems to have helped the gorillas in Africa. And on that note here are just a few tours that take you to see orangutans and they also benefit the orangutan cause.