The Pan Am Games are almost over and one of the competing countries is Jamaica. Here are some Jamaican tidbits:

So what about the Rastafarians?

After visiting the Rastafarian Indigenous Village near Montego Bay I was enlightened beyond popular misconceptions of this practice.

Rastafari is more a way of life than a religion. Generally the Rastas use the words of Haile Selassie as their guiding principles.
Haile Selassie was the emperor of Ethiopia from 1930-1974. Prior to his coronation, his name was Ras Tafari Makonnen. 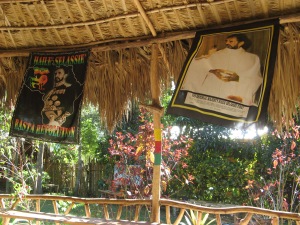 Marcus Garvey, a Jamaican activist and orator, amongst other occupations, had stated,

“Look to Africa, for there a king shall be crowned.“

During this time in Jamaica (1920s & 30s), there was a burgeoning Black pride and return-to-Africa movement. Rastafari was later founded and the name taken from the emperor’s pre-Coronation name.

Some people dubbed Selassie, who visited Jamaica in 1966, Jah (God), the Messiah, the Black Moses hence the reason his name was adopted to the Rastafari faith. Rita Marley, Bob Marley’s wife, converted to Rastafarianism; however, Selassie continued to deny the divinity placed upon him.

Though Ganja, marijuana, is very important in Rastafari tradition it is not mandatory. One can be Rasta and never smoke the stuff. (Other cultures also use mind-altering substances for spiritual enlightenment e.g. peyote used in Native American ceremonies.)

The Rasta way of life is characterized by the following: 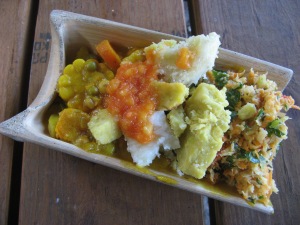 Located in the same time zone as eastern Canada and the U.S. and with the same electrical outlet Jamaica is an ideal place for a quick getaway. Water is potable and modern conveniences are easily found. Sea air, sunshine and the availability of fresh food also make Jamaica a healthy place to travel.